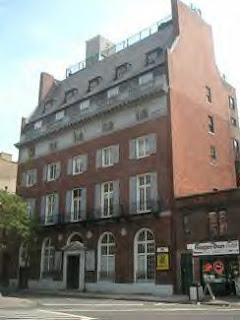 I don’t know if you would consider Greenwich Village an urban slum area, even then. But it was a lot cheaper to live there than it is now.
The first school I ever went to was Greenwich House (a settlement house) at Barrow Street and 7th Avenue. I attended Nursery and Kindergarten there

You went through the double doors and up some steps, I think. There was a gated area on the right with desks for the staff and some benches. Opposite the front door was the entrance to the theater. I think a teacher came down and collected her charges.
This was the depression, around 1936, so on arrival every day we got a dose of cod liver oil, orange juice and a piece of French bread with a smear of peanut butter.
I don’t remember what we did all day, or half a day. But I do remember naptime on pads with a blanket and the roof playground. I also remember improvisation where we all danced around in little green tunics, led by a teacher with wild black hair tied back with a scarf. Remember it was the days of Isadora.
Since I was very thin, it was decided that I have “Sun baths” now and then. All this was done right there at Greenwich House. I think my mother did a wall border for one of the rooms. I remember a parade of animals near the ceiling.

The worst day I ever had there was my brave day. I must have been around four or five. I told my mother that she could leave me at the door and I’d walk in alone. I panicked just inside the door and ran out, just in time to see my mother’s bus going up 7th avenue.
I was in tears when I got into the building, but the worst was yet to come. They mixed me up with a child that had a doctors appointment that morning and by the time my mother got back I was hysterical. It’s amazing that young as you are, you remember things like that.

Every Christmas we had a pageant in the theater directed by Mrs. Murphy. She would yell and push us around, but I guess we were pretty good. I remember one play we did for a number of years “A Star Has Fallen” I started out as a little angel polishing the stars and graduated to one of the crowd.

The theater was also used by Equity players and I was the daughter Mary in a production of O’Neill’s “Beyond the Horizon” I was given a teddy bear by the cast and I died by the second act. I found the script for my part a while ago and it was all “Yes, daddy” and “No, mommy.”

All this was looked over by Mrs. Simkovitch, who would walk around saying hello to all of us. http://greenwichhouse.org/about-us/history
A wonderful place that launched us all.
Posted by A Cartoonist's Daughter at 3:51 AM