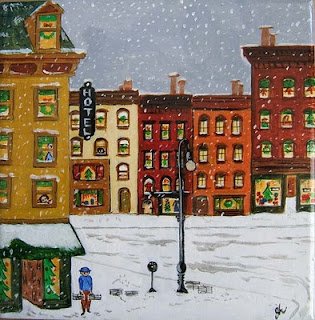 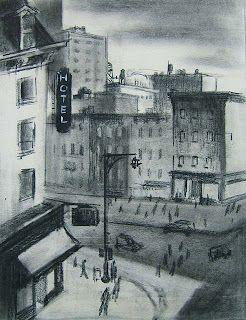 My version and Jack's of 7th avenue and 14th street.

My next school move was PS41, the old one, on Greenwich Avenue between 10th and 11th Streets and the next apartment move was from Waverly Place to 7th Avenue, between 14th and 15th Streets. This is the one apartment that no longer exists. It is now one of those huge apartment complexes, taking up the whole block, probably condos by now.

Across the Street was a hotel. Around the corner on 14th Street was the art store my parents used for years, Joseph Torch and a restaurant where you could take out dinner on a paper plate, with another plate on top.

My girl friend Greta lived upstairs and we would walk to school together going through the underpass on 14th Street, the biggest Street we had to cross. Greta’s parents also bought the Sunday Journal American that had all the comic strips. Of course my parents wouldn’t have that ‘rag’ in the house…only The New York Times for them. No strips, and my dad was a cartoonist? Uncle Don used to read the comics on Sunday mornings, so I’d go up to Greta’s to listen and follow along. One year they had a newspaper strike and Mayor LaGuardia read the strips to us with passion.

Greta’s father had a woodshop on 15th Street and I think that shop started my love of wood and wood chips…I can still smell the sawdust. We also had a deli on 15th Street. Barneys near 17th Street and Street and Smith publishing where my mother inked comic books freelance for a while.

Now for the apartment. I don’t remember it at all, or Greta’s. How can that be? I remember everything surrounding it. I think my father had a studio in the apartment, he usually did. My mother was unhappy about her art arrangements. As usual she was shunted off, this time to the bathroom. The bathroom was pretty large and had North light, but still.

Posted by A Cartoonist's Daughter at 5:05 AM