The House in the Woods 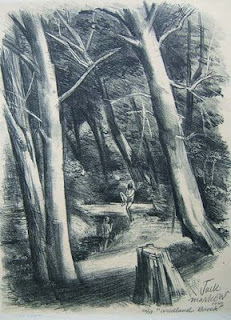 Sometime in the late thirties my father bought a one room school house and had it moved into the woods in Middletown, NJ.


There was no electricity, running water or anything else, like a bathroom. They carved a bedroom out for Susan and me and added a small screened in porch. I think we managed for a summer or two and then they put in a well and added a kitchen. We still had to use the woods for a toilet and the brook for a bathtub.


The kitched had a stove that was fed by bottled kerosene and there was a pump in the sink for water. I still have a lamp from that house...now electrified. I believe there was some kind of radio that ran on batteries or maybe just a wind up victrola.

Outside of our bedroom was a large table for eating and drawing. A closet had been built in our bedroom covered by a silk screen print of children's faces...I can still see it.


We would leave NYC in Jack"s old car and drive down some road (no Jersey turnpike then) Maybe I sat in the rumble seat. Sometimes we would stop at a road side stand for hamburgers and root beer. This was really a treat and very good food. Off we would go, again...probably stopping in Red Bank for some food...Did we have an ice box? I seem to remember Jack hauling blocks of ice. Driving on we would make a right onto a dirt road and then on to our house.


I was about eight years old and Susan about two. Jack would make me paper doll dresses and tell me stories. His idea of a paper doll dress was to cut a shape out of stacked papers and then I could paint them into different outfits. Paper dolls were my passion.


I had friends from school here...I can't imagine what they thought when we told them that they had to go to the bathroom under a tree. I hardly think that my grandmother would have enjoyed this...so I think visits with relatives were in Manasquan.


This was a great place and we all had a wonderful time. Though I do remember one year when we were leaving, and my parents were hammering some boards on the windows that they disturbed a hornet's nest. They were jumping around and yelling for us to stay inside.

Eventually my father sold the place to a friend and they followed the other artists to Rockport and Provincetown.


Posted by A Cartoonist's Daughter at 7:40 AM