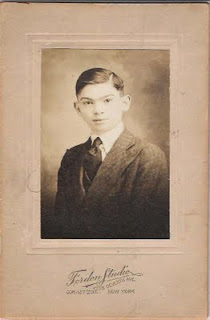 [At the beginning of this century, my father, a cooper by trade, in search of a better job opportunities left Romania for England. With him were his wife, son and daughter. Two more sons were born in London; I was the youngest. Soon after, the family decided that America was much more “golden” than England and embarked on an old tub for Ellis Island. It was an agonizing trip according to my sister who is nine years older than I am. She remembers crowding, sleeping on open decks, heavy storms and seasickness. I was only two and spared the memory. As we immigrated from port to port, inventive immigration officials tacked on new endings to our name. Originally Marcovici in Romania, it became Markovitch in England and finally Markowitz at Ellis Island.

Ours was a typical entrance into the New World. For example the immigrant “greenhorn” has a fellow countryman living in the city as a real established New Yorker (perhaps for two months) who knew the ropes. The friend finds the greenhorn an apartment and helps him move in. Ours was on Allen Street, a narrow thoroughfare, always noisy and eternally dark, dominated by the elevated railroad (the el) Fortunately our tenement was six stories high. To escape the gloom we mounted the stairs to the light and sun on the roof. Typically tenement dweller adopted al fresco living where fire escape and roof became naturally air-conditioned sleeping quarters.

Luckily there was a glut of empty apartments in the city and one could move at will. Leases were no problem, there were none. We moved every year hoping to better ourselves, thus we progressed from a toilet in the backyard, to one on each floor, to one in the apartment. Bathing facilities were makeshift, the most luxurious being the kitchen washtub.

Our next move was to a gloomy bunch of rooms on Norfolk Street, again on the East Side. My few recollections of the place were a story about a grocery boy, who rather than go up and down stairs would jump from one window to a window in an adjoining building. Finally toppling, he was saved by the many clothes lines hung across the alley.

East Sixth Street was a move uptown but still in the slums. We now lived in a three-story brick house with a shared toilet on each floor, and wonders of wonders, the toilet had a window. These were the usual cramped quarters for a family of seven, which we’d now become. I addition we occasionally put up a cousin who had just come from the old country.]

This is what my father (Jack) wrote about his early memories of New York City.

Posted by A Cartoonist's Daughter at 8:28 AM