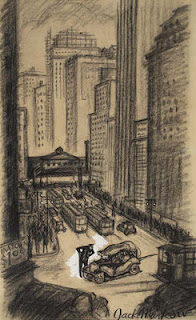 Though my father was poor growing up, he always told me that NYC was a great place to be, even without money. He learned to play piano at an early age. (I don't know how my grandparents managed that) His parents were all for education and he and his brothers were all for being as American as possible. Coney Island, baseball, Central Park and movies were the big deal.
Sometimes after school he would deliver flowers and get a few pennies. The movie admittance fee was a nickel...so if you had two cents, you waited around to see if some kid would come along with three cents. If you had three cents you were king.
His family consisted of mother and father, sister Sally, Louis, Mike, my father and Al (the youngest..born in America) The boys did well and ended up as a psychiatrist, business man and musician and Sally married a guy with some dough. Only my father chose a lowly profession, ART. For years, he told me, his brothers tried to persuade him to go into some business.
By the time he went to high school he decided that he would be an accountant. The school was Commerce High, whose big claim to fame was that Lou Gherig had gone there. The art teacher taught a little bit of cartooning and Jack was hooked.
Posted by A Cartoonist's Daughter at 9:29 AM