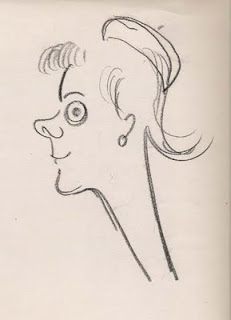 My mother was born 60 miles from New York City, but it could have been a million miles away.

My grandfather was a staunch Republican...believed in passing the hat when sickness came to friends and co-workers. Hated the New Deal. He was also a Quaker, complete with thees and thous. He always wore black suits, flowing ties and high buttoned shoes. Rode a bicycle everywhere. The bookshelf in his bedroom had many books about Abraham Lincoln, his hero. He worked for the railroad and then became a printer of pamphlets etc and a notary public.
He died when I was 8 Years old, but I remembered him very well. He gave me printing paper to draw on, played games with me and I remember him traveling to New York one Christmas to deliver a box of gifts from the relatives. I adored him.

My grandmother was nice and made great desserts. She was a bit of a prima donna, and reminded people often that her family in Philadelphia had two horses and marble steps. There were children and grandchildren around. 45 Parker Avenue, home.

My mother was a modern woman. She drove a taxi and played the piano for silent movies and she got to Europe and finally New York City. She wasn't that good an artist in her teens, but got better and better. She also would go back and study anatomy from time to time and French.

Posted by A Cartoonist's Daughter at 4:22 AM