When my father met my mother 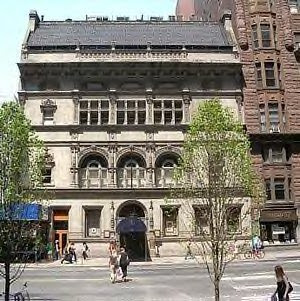 [When I first met her, we were both attending the illustration class at the Art Student’s League. I scarcely paid much attention to her then. She was frowsely dressed, clothes outmoded, too large for her slim figure. Long and disheveled hair. I had a full- time job in an art department and had been taking evening classes at art school. Progressing, for several years, from several years of life classes to illustration and composition. She, I later learned, came from a small town on the Jersey shore. Her parents had planned for her to go to “Normal School” and become a teacher, which were wishes not abnormal for parents at that time. In those times for women, it was either teaching, nursing or shorthand and typing. She, however rebelled and wanted to be an artist. She enrolled in a Philadelphia art school and one of her paintings grabbed a prize in a contest given by a women’s magazine. The reward was a reproduction of her painting as a cover of this magazine plus some cash. With this money and additional sums squirreled away, she was able to come to New York City, where the real art was. Her parents were poor; she was poor. She worked at any art job she could get-anything to be able to stay in New York. She worked at successive women’s magazines and department store art departments, drawing fashions which she hated and knew she wasn’t very good at. But it was enough to sustain her in the city for periods of time and not have to go back to the drabness of her small home town.

Classes ended in May and I did not see her until the following October…And what a change! Her hair was cut in a boyish bob, framing large blue eyes, regular features and highly pink cheeks. I realized she was an extremely handsome woman. Why the transformation? Partly the result of a long summer spent in Europe. It seems that in her hometown she had a close friend, Sara, whose parents were rich. Sara wanted to travel. Rather than having their daughter go off alone, the father paid the way for Margaret to go as a companion.

Margaret and Sara covered most of France that summer, climaxed by a lengthy stay in Paris. Here Margaret met a woman who had started an art school. She studied at this school and also did hundreds of sketches-a fine record of her trip abroad. She also became enamored of the French life style. She studied French, tried reading it and picked up some conversational French. In a way she was becoming a real Francophile.

I got to know her quite well that fall. The process of getting acquainted was full of surprises. She had a good ear for music being brought up in a musical household. Her mother, originally from Philadelphia, had studied opera there and had never quite gotten over the experience. The house in New Jersey resounded with soprano trills arpeggio piano. Margaret, herself, had a sure but small voice, always on key. She played the piano “by ear” in a masterful way. She was one of those people who could pick up a tune at once, and immediately embellish it with chords. I envied her that talent. I had seriously studied the piano for some years, played the classics and was a good sight reader, but alas, my ear had been sadly neglected. I discovered she had a swell sense of humor and also was an excellent mimic. Her theatrical flair turned up in later years in small theater groups, in acting and set design. Wonder of wonders! She could also manipulate the ukelele, the favorite instrument of that generation, complete with voice and true chords]


Posted by A Cartoonist's Daughter at 4:17 AM