The Dreaded Arrival of My Little Sister 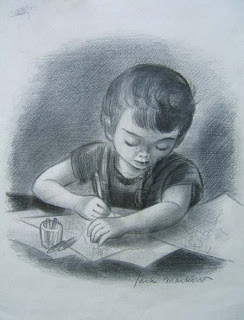 When I was Six years old I was told a little bundle of joy was soon to be added to the family. I, the spoiled, talented princess, sole owner of my parents, was to be replaced.

In the olden days, mommys were shipped off to the hospital for 10 days...a nice rest after giving birth. While my mother was gone, it was decided I would spend one week with Jack's family and one week with Margaret's family. I was totally miserable.

At Jack's family, my Aunt Sylvia, thought I looked too much like a waif and had my hair permed. I hated it. The only highlight of that was week was seeing Shirley Temple in "Rebecca of Sunnybrook Farm"

The week with the Traffords went no better. I drew pictures all over my Aunt Gillete's living room wall. She yelled at me "I don't know what they do in the big city, but we do not deface walls here". Obviously I was not meant to be outside the art community.

I finally went home. We lived in an awful place on Waverly Place, next to a Catholic girls school, and across the street, which was later to become a favorite watering hole, Julius' Tavern.
.....and there she was, my little sister.

Later we moved nearby to a much larger apartment, and she was still with us. I remember walking into the place one day and all I saw was Susan in her play pen, with a little blue knitted sweater on. During this time I put on my snow suit over my pajamas and ran away to the corner and begged passer bys for a nickel for an ice cream cone. Somebody did give me a nickel after I told him that I was a poor neglected child. (He must have been amused by that) As I was licking my icecream cone, my father came storming out of the house, none too pleased with me. By this time I didn't want the cone and was in tears. My parents very coldly said that I should eat the whole thing...since I had gone to so much trouble to get it. Boo-Hoo!

Of course I learned to love my sister (even though I used to scare her, once in a while) She was a very calm, even tempered person, and she adored her older sister (that always helps) She died when she was only thirteen years old, and I've missed her ever since.
Posted by A Cartoonist's Daughter at 5:52 AM