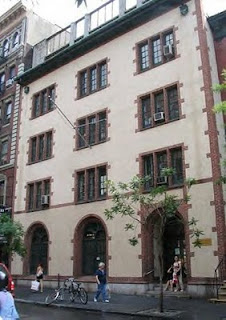 Well, my parents scrapped up the $125. and I went to this progressive private school for two years…what they called the sixes and sevens (1st and 2nd grade) The funny thing is that I remember so much about it.

We sang a lot of folk songs every day, complete with a teacher playing the guitar.. Our lunch was served in a basement a few blocks away and we had to walk hand and hand. My partner was often Spike, who had one fingernail, grown long, that he used to grind into the palm of my hand.

We did a wonderful program on the Dutch in Old New York. We pretended to live there and even made candles and soap.

I met Mickey and Lauren Tucker there and knew them for years after. Once Mickey hit me in the hand with a belt, and I still have the scar amid the wrinkles. Boys were already giving me a hard time. Mickey made up for it years later when he came to see me after my sister died and had a long comforting talk with me..

I was still going over to Greenwich House afternoons and doing pottery, art and participating in their theatrical productions at Christmas.

While we were living in our second apartment in Waverly Place my mother’s cousin Traff came to visit and brought me a pretty silk dress. Traff was the scandel of the family. He was in the Navy, and had left a wife and son in New Jersey. While in China he had met a nurse, Jane (I remember her name because I thought it was so romantic) divorced his wife and married her. After that his name was only mentioned with scorn, except for his sister, Emily and my mother. He was her favorite cousin. Oh, yes. He was really good looking in a rugged way.
http://en.wikipedia.org/wiki/Little_Red_School_House

Posted by A Cartoonist's Daughter at 4:49 AM